On Connor's birthday Friday Mommy and Daddy came to Connor's school to celebrate his birthday with his class and friends. We brought him Power Ranger balloons and cupcakes. Mommy also got Power Ranger rings to go on the cupcakes as party favors. We were a little concerned at Power Rangers wouldn't be "cool", but the kids absolutely loved everything. 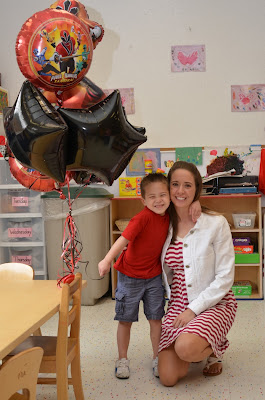 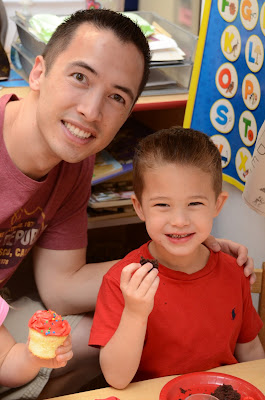 Connor was very happy to see us and it was fun to see him with his VPK class. Typically, we drop him off prior to the VPK class starting and pick him up after it's done so we don't usually get to see all the friends and classmates that he spends most of his time with. They were all very sweet and cute and you could tell Connor gets along great with them. 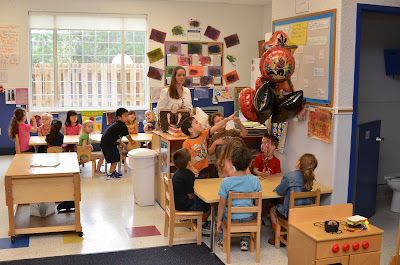 We took a few pictures with Connor and his balloons, then everyone sang Connor "Happy Birthday". It was possibly the slowest rendition I can recall, and Connor was a little shy with all the attention, but you could tell that he loved it.

The kids all liked the cupcakes and we felt guilty for bringing them since the teachers had to clean up so many messes. The bright red icing got all over faces, which we expected, however it also got all over arms, clothes and even hair. Some of the girls inadvertently would turn their heads to close to a cupcake and many had red icing caked into their hair. Yikes. 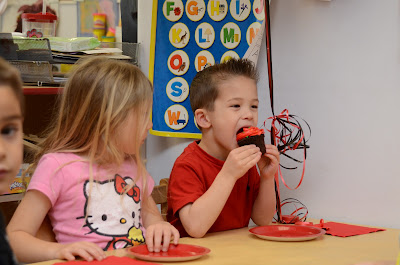 It was great to spend some time with Connor at his school, we love our big boy. 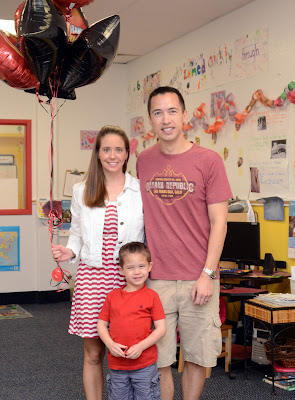 Hope you had a great birthday big guy.