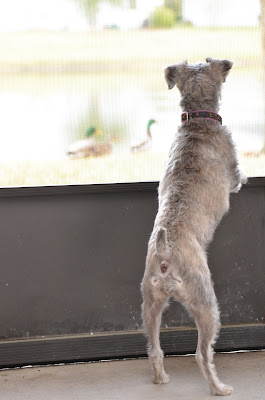 Chloe's adjusted well to Florida so far. She was a trooper on the car ride down and has been a good dog for us as usual. She really didn't seem to care for the grass in Florida at first. The grass leaves are thicker and much different than what we're used to in the Midwest. For a long time, when we let her out, she'd be hesitant to put her paws down and you could tell she was uncomfortable.

In our rental, we don't have a fence and we were pretty concerned with how this would affect her going outside to do her business. We put a stake out so we could attach a leash, but Chloe's been such a good listener and has done so well that we never use it. Typically we can just open the door, let her run out and do her stuff, and then she comes right back.

She likes this house pretty well and loves the view of the pond. During the days, she'll lie in the master bedroom where she has a nice view of the pond and can still see the front door in case anyone comes to the house. Her favorite thing to do is watch the ducks. There are three of them that seem to live in the pond and they love pecking around in our backyard. Chloe is very interested in them and we're a little concerned she'll chase them or catch one when they're around. She's run all the way down to the water a couple times when they were nearby. Typically if she needs to go out and we see the ducks, we'll make her go out in the front yard instead. We're not sure what would happen if she ever caught one, so we don't risk it.
Posted by Shawn Vernon at 12:51 PM