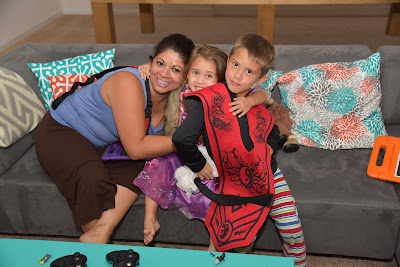 We've been using a babysitter named Jessie for a little while now and the kids really have fun with her. She's good about engaging the kids and playing the things they like. When Andrea and I came home on Saturday night we saw them all maxing and relaxing upstairs. They all had dressed up together and their outfits were pretty hilarious. Jessie had on some Nerf armor, Connor had on a Ninja Outfit from his birthday party, and Paige had on her pajamas, with a Rapunzel dress over them, and a fur vest over that. She was sweating in it all, but she knew she looked so fabulous she refused to take any of it off. I had to grab the camera for a quick pic of them all.