Andrea and the kids fly to Florida 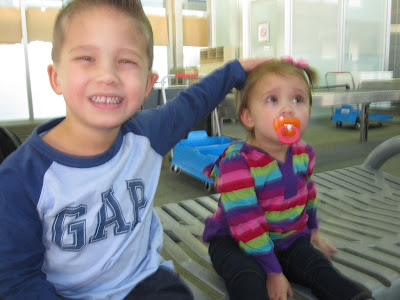 On Saturday, Andrea and the kids made the big trip to Florida.

After the movers left the house on Thursday, Andrea stayed with Grandma and Grandpa Anders in Odessa with the kids. On Saturday morning, they said their goodbyes and the Gobles took everyone to the airport. Connor was excited for the big day but has no sense of distance. On the way to the airport he asked "Are we in Florida yet?".

Andrea did a great job getting both kids, two suitcases, two carseats, a stroller, and carry-on luggage through the check in line, security, and on to the plane. 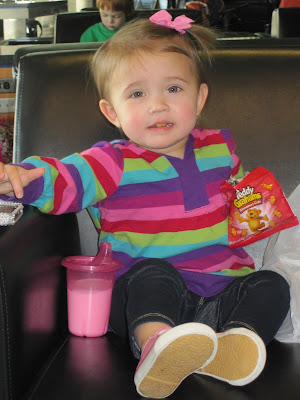 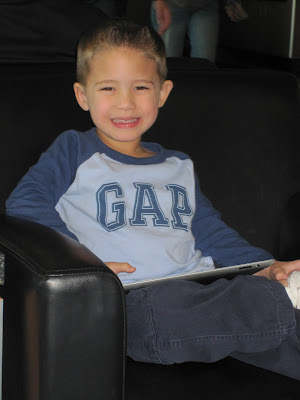 Unfortunately, once they got on the plane, Paige decided she didn't want to cooperate. She started crying, and before long she was throwing a complete fit. Once she gets like that, it's nearly impossible to stop her and she can go for hours. Andrea got her calmed down after about ten minutes, which was pretty darn good, however it was clear that the other passengers weren't thrilled with the very vocal baby. Paige was only happy if she had a half dozen pacifiers ("Nuk Nuk's") and was watching a DVD. She also didn't want to sit in the seat and wanted to stand on the floor.


That plan worked for a while. Paige stood on the floor and watched the DVD while it was on a tray. Soon, this wasn't entertaining enough and she decided she wanted to play with it. Andrea gave in, and didn't figure she could hurt the DVD player, but after a few minutes, it stopped working. Andrea didn't realize it until they were getting off the plane later, but Paige had managed to detach the DVD player's battery. After that, it was a constant struggle to keep Paige from banging seats and being wild.


Connor was a perfect angel. He listened to the DVD player and played on the iPad. He is a great traveler and a good listener. We can't say enough good things about him.


Finally, the flight was over. Andrea got them off the plane and strapped Paige in to the stroller. Paige hated this idea and shrieked and cried the whole way through the airport. She screamed from the time they got off the plane, while they rode the little tram/train between the terminals and all the way to baggage claim. Just as Andrea got the bags and they were getting out of the airport, Paige fell asleep.


It would have been nice if Paige had fallen asleep on the plane and it was very embarrassing for Andrea to deal with the situation and be "that mom" that everyone stares at and judges. From the time they got in the airplane seat and Paige started her fits, Andrea was sweating like crazy, not because she was hot but because of the stress of the situation. Andrea held it all together and did a great job. I picked them up and it was great to see them after having been apart for a few days. We all piled in to the SUV and I drove everyone to Daytona Beach to visit with Great Grandpa and Great Grandma while we waited for all of our things to make it down to Florida.
Posted by Shawn Vernon at 10:24 AM