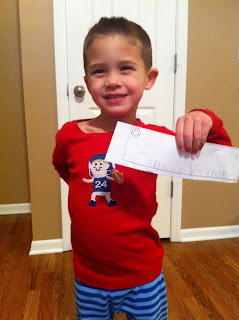 On Friday, Connor came home from school with his best writing example ever. He's been working on writing his name for a while and has continued to get better and better. Initially, he just did his first name and had a piece of paper with a separate box for each letter and all the letters were capital letters. His teacher continued to challenge him by adding his last name, removing the boxes and also doing mixed case (capital and non-capital) letters. We were very impressed with the example he came home with Friday, he's awesome! 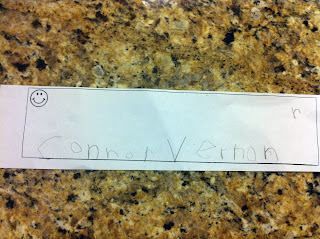 Nice! Luckily there are several common letters - o's, r's, and n's. That helps. It's nice not to have that 15 letter name. Good job Connor!