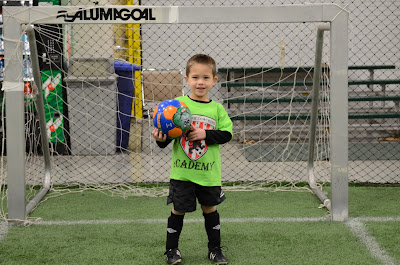 Saturday was Connor's last soccer practice at the indoor league. It was a pretty disappointing turnout on Saturday, but for a league that starts at 8:00am on a holiday weekend, maybe that should have been anticipated. Just one other little girl showed up. Her brothers came with her, and the coach let them participate, but there are usually quite a few kids there. Even worse, the coach showed up 30 minutes late for the 60 minute practice, so they only got 30 minutes of time to do anything. I played with Connor for the first 30 minutes, and we had fun, but it was pretty irritating.

Connor was a good boy as usual and on the way home he said he wanted ice cream. I thought that was fair since he's been such a great sport getting up every weekend for his early practices, so when we got home we spoiled him a little bit. He had vanilla ice cream with sprinkles, chocolate and honey. 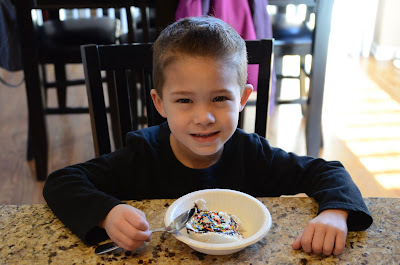 We would've liked to see Connor's soccer skills in action. He puts his whole heart into his efforts. Grandma Alice