On Friday, Andrea's BMW got picked up in Liberty. We had originally planned for me to tow it behind the SUV when he drove down to Florida, but that was a pretty complex plan. I looked in to buying a trailer hitch, renting a trailer, figuring out how much my SUV could tow, etc. and I was getting pretty uncomfortable with it. I was worried I'd have an accident and total both cars at once. Andrea did some research and found that it was about $600 to ship the car. When we had been doing the math on towing the car, we figured it'd be not a whole lot less for the tow hitch, trailer, and extra gas the SUV would burn pulling it. It was definitely worth the cost.

We had hoped that we could have our car picked up Thursday while our house was being packed, but the way the truckers operate it didn't work out. Typically, the drivers that have room on their trailers will just check to see if any cars need to be picked up along their route and then call while they're coming through town. Unfortunately, nobody was available to pick the car up Thursday, so Andrea left the keys with our neighbor Teri. On Friday, a trucker finally came to get the car and Teri was nice enough to drive it to the nearby Target so it could be loaded. She snapped a couple pictures as they loaded it on the truck. 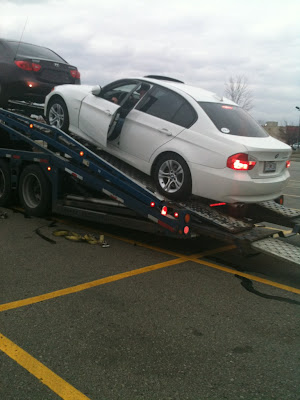 Now, I'm skipping ahead in time a little, but the car safely arrived in Florida on Monday, January 30th. We picked it up at a truck stop near our house and it was in great shape and everything worked out great with the transport. Andrea is very happy to have her car back and excited to drive it around sunny Florida. 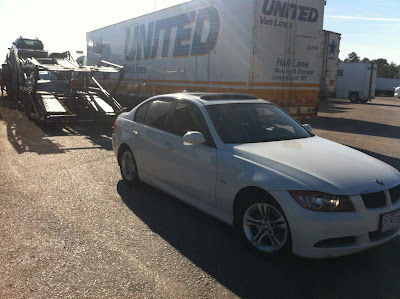