On Thursday, January 26th, I started the long drive to Florida. The SUV was packed and close to the weight limit with all the things that the movers wouldn't pack in their truck. While the movers were still packing their truck, Andrea and I went to McAlister's Deli for our last lunch together in Kansas City.

Andrea took a quick picture before I set off. I think you can see Chloe in the passenger seat. 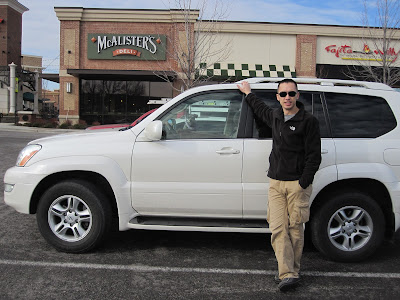 The weather was pretty nice considering we were driving in the dead of winter. For the first few hours it was cloudy and not too bad. Once the sun went down and I got to St. Louis it started to rain. It was pretty ugly for a while. For about 6-8 hours, I drove in the dark and in the rain and was pretty tense. I was gripping the wheel pretty hard and it was exhausting.

Chloe and I took a few breaks and by about 11:30 I stopped for my first rest. I'd considered finding a hotel, but decided it would be simpler with Chloe if we just stopped at a rest stop and took a quick nap. I knew I wouldn't be able to sleep much that night since I was so excited and tense, so I stopped at a rest stop and tried to get comfortable in the front seat. It didn't work. After about 10 minutes of tossing and turning, I looked in the back of the SUV. I was bringing a number of blankets down and had laid them flat on top of all the boxes. There was only around 2 feet between the boxes and the roof, but I crawled on top of everything and it was surprisingly comfortable. I closed my eyes and the rain put me to sleep for about two and a half hours.

When I woke up at about 2am, I was surprisingly refreshed and ready to continue. I crawled back in to the front seat and tried to put my contacts in. I was having trouble seeing them in the dim light of the car, so I decided to open the door. Unfortunately, I'd locked them with my key before I went to sleep and wasn't aware that my vehicle had a security "feature". Since I hadn't unlocked the car with my key before opening the door, my car thought it was being stolen so it started flashing the lights and honking the horn. I panicked and pushed every button in the car, but it just would not stop. I tried the buttons on the keychain, but that didn't work. Finally, I started the car and started driving it around, thinking that it would convince my car that everything was OK. Still, it would not stop honking and flashing. I wanted to drive to the highway to get out of there and give everyone peace and quiet, but that wasn't even an option. Remember, I opened the door so I could put in my contacts. I could hardly see anything. Finally, after I slowly drove my shrieking car around the rest stop, and probably woke everyone up, my car decided to relax. I parked, put my contacts in quickly, and slunk away in shame. Very embarrassing and stupid.

I set off again and only made it about 3 hours before I needed to stop again. It was still dark, but it finally had stopped raining. I pulled off in a rest stop in Georgia and took another nap. This time, I only napped for about an hour and a half and woke up around 7:30 am (now in the Eastern time zone). I crawled back in to the front seat and made sure that this time I started the car before opening the door. When I turned the key I just heard "click, click, click, click, click". It wouldn't start. At this point I was pretty upset, but thankful that in this day and age we have decent technology at our disposal. I was able to use my Garmin GPS and cell phone to find a number of close tow services and was able to contact one. It took him about 30 minutes to show up and another 15-20 minutes to jump my car and assess the battery. He charged the battery up, then tested it and it seemed fine. I started my car and he assessed the battery again and his equipment registered a charge coming from the car, so it didn't seem to be the battery or the alternator. I'm still not sure what it was, but I've started the car 20-30 times since then and it's started up fine every time. It's possible I left my lights on when I took my nap, but was only asleep for an hour and a half. Who knows. I was glad it wasn't serious and glad to be back on my way.

Before too long I crossed over in to Florida and made it to Jacksonville. I got the keys for our rental and had some time to check it out. It was a long drive, but not as bad as I'd anticipated. I was happy to have my major piece of the move done and that night I slept better than I had in weeks. I was definitely exhausted and very relieved to finally arrive.
Posted by Shawn Vernon at 7:28 PM

Wow! Glad you made it safely.