On September 10th, 2019, Andrea had her third of four chemotherapy treatments. 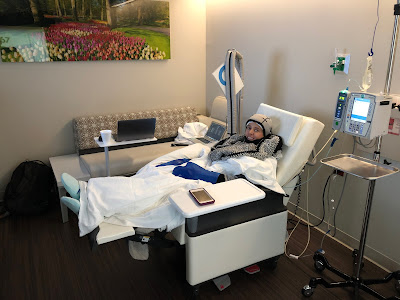 We are getting used to the process now, however it seems like every session starts late. The first time it was an insurance authorization that almost delayed the treatment completely, the second time it was delayed since they didn't have the Paxman unit ready and switched on. This time it was Andrea's hard-to-find veins in her right arm. Since Andrea had some lymph nodes removed on the left side, it's recommended for her to have the IV on the right side. It's usually a little difficult for them to get the needle in properly, but this time was very hard for some reason. They had three different nurses try it and they stuck her at least four or five times before they got it in place. Since we put the Paxman cap on before the IV, it meant that Andrea had an extra hour of her head being frozen. The entire treatment is scheduled for 4 hours and it took 6.5 hours on Tuesday.