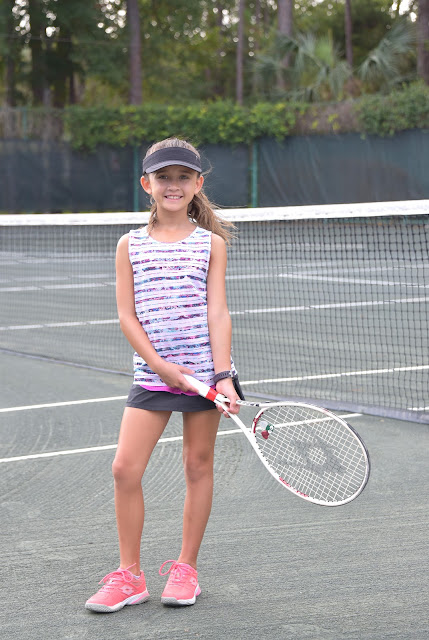 Yesterday, Paige played in her first tournament and actually played her first matches as well. The Grand Prix tournament format consisted of round robin play and the kids play one-set matches where the first player to win five games wins the match. There is no-ad scoring and whoever gets five games first wins, so there's no win by two. The format is supposed to keep things moving quickly. The tournament was in our neighborhood, so it was nice and convenient. Unfortunately, it rained early in the morning and the courts were all still soaking wet at 8:00 when we arrived. Since it was in our neighborhood so we were able to go home, wait an hour and half, and then return.

Paige has been going to clinics, taking lessons, and practicing tennis for quite some time; however she has never played a full match where she had to keep score, serve, and do everything on her own.  Paige played 10U Orange ball tennis, which means the ball is less bouncy and the courts are slightly smaller. Extra lines were drawn in to the clay with a tool that scrapes the clay, and they are definitely a little harder to see, especially as the day went on and they got scuffed up and stepped on. 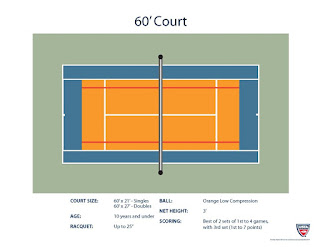 Even at Paige's age, the parents are instructed to stay off the court and stay out of the match discussion. This is very hard, especially when balls are clearly called incorrectly, children are serving from the wrong side, or in Paige's first match when she accidentally kept the score wrong and gave a game to her opponent. When Paige was winning a game 40-30, she said the score was 40-15. She served the ball and won the point, so she should have won the game regardless. Paige got confused and went on to serve another point and said the score was 40-30 before she served. When she lost that point she thought she'd lost the game and it was very hard to keep silent as Paige's opponent was happy to take the gifted game and move her score marker up. Paige ended up losing that match 5-3, although the match score should have been 4-4. It was a close match and I wish Paige had a shot to play that 9th game, she would have had a good shot at winning it.

Overall, the girls that Paige played against were fair and you could tell they were all trying hard and it's definitely difficult to keep track of who's serving, what the score is, and what is going on. It was a learning experience for Paige and between matches we stayed positive and encouraged her to keep doing her best. Paige played a total of four matches. She won two and lost two and we are so proud of her for getting out there on a hot and humid day and putting everything together that she's been practicing. 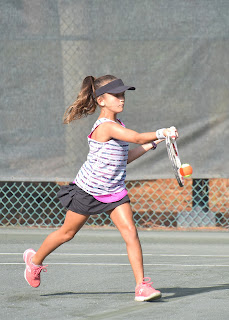 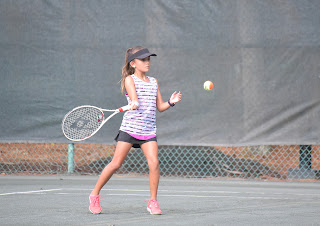 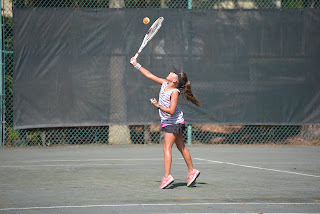 I put together a video with some good points from each of Paige's matches. 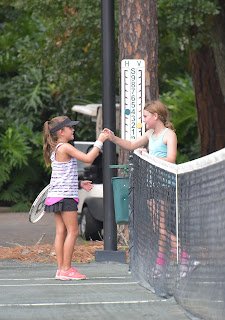