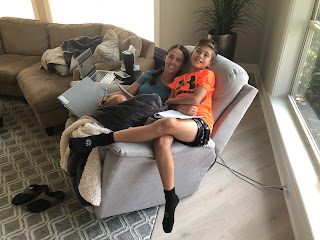 Connor is getting in to the swing of things with 7th grade and it's been quite a lot of work already. There have been multiple tests in Civics and Math and some quizzes in Spanish and Science. The first few tests/quizzes were a little rough, but we're getting in to a better routine about studying and homework and Connor's grades are pretty good so far.

The biggest struggle this year has been math. I'm not sure if the teacher's strategy in math class is clicking with the kids and it sounds like some have not been scoring well. The notes have also been somewhat confusing at times, so when Andrea is trying to help Connor with the math homework it's been difficult. Andrea and Connor have spent a lot of time on the material so far and Andrea has been working with him many hours already this school year. She will go over each question in detail, create practice quizzes for him, and make sure he has a good grasp on the concepts before the tests. It has paid off already and the last few quizzes, Connor has gotten some of the highest scores in the class. I'm proud of both of them for taking the time and effort to build a strong foundation for Connor. I snapped a pic of them studying this past week together.
Posted by Shawn Vernon at 3:25 PM