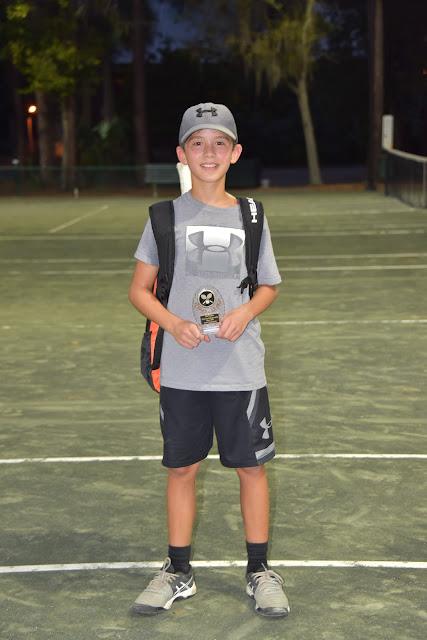 Yesterday, Connor played in the Grand Prix tournament in our neighborhood. In April 2018, he played in the tournament at the 12U level-green dot and it was a difficult experience for him (http://www.vernonvolumes.com/2018/04/on-saturday-april-7th-connor.html). This year Andrea signed him up for the 14U division so he would play with regular yellow balls, although we knew it would be stiff competition since he could be matched up with boys two years older than him. The matches were setup with no-ad scoring and the boys played one set where the first player to five games won. It was designed to keep the matches moving, although the entire match started late and as the day went on the match schedule got farther and farther behind. Connor was originally supposed to start at 1:30, but we were told to come at 3:00 and his first match didn't start until almost 4:00. The day was a little cloudy at least, but it was the hottest time of the day to play.

I honestly didn't expect Connor to have much of a shot and when I saw all the boys standing together to receive their initial court assignments. Connor was one of the smallest boys there and some of the boys were a full head and shoulders taller than him. Connor gets plenty of coaching with lessons, clinics and the tennis academy, however I decided to give him one tip and I encouraged him to drive the ball and force his opponents to play to his pace rather than let them dictate the pace of the match. I figured he didn't really have a shot at winning so it would be good practice. Connor has a tendency to get a feel for his opponent's game and then play just a bit better than them to win versus just going for it and playing to his own ability.

In Connor's first match, he lost the first game and had a few misses where he was trying to swing hard. I was starting to worry I'd given terrible advice, but thankfully Connor either disregarded what I said or he just dialed everything in because he went on to win the first match 5-1. The boys all played four matches to qualify for the playoff round and Connor won all four of his matches 5-1, 5-0, 5-1, 5-0. The initial matches had some close games and some good players, but Connor was hitting well and played solidly and consistently.

Three boys finished the early rounds with 4-0 records. Coach Max decided the fairest way to determine a winner was to have the boys each play each other to see who would be the tournament champion. Connor played in the first match against a high school freshman that he's played once before on hardcourt and Connor lost their last matchup. This time around Connor fell behind 1-3 at one point but he dug in, won a couple of key points, and ended up winning the match 5-3.

Connor had the choice whether to play the remaining boy next or have the other competitors play each other first. Connor decided he wanted to get it done with and started his final match immediately. Connor's last challenger has played against him twice previously and their matches are always crazy, physical, and close. Connor is at least a full head shorter and they both are incredible at covering the court and getting balls back in play that most people wouldn't even touch. It was getting dark, the lights were on, and unfortunately I didn't get any videos during their match. There were some incredible points and Connor was working harder than I've ever seen. Although it's not technically the best form, Connor was swinging so hard that he was leaving his feet and going airborne as he jumped in to his shots, using every ounce of his body to generate power. He was trying so hard and it was fun watching him competing and doing his best. Connor got up to a 4-1 lead but then started to slow down. He was clearly super tired and all of the exertion was catching up with him. Connor lost the next game, but managed to close out the match the following game and won it 5-2. 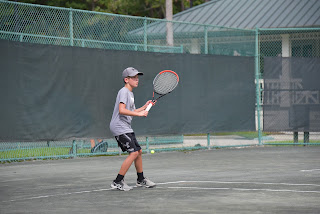 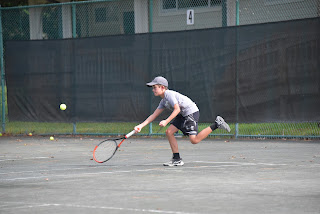 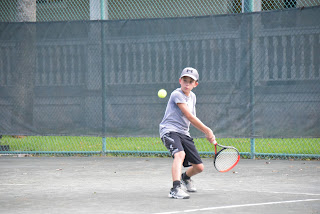 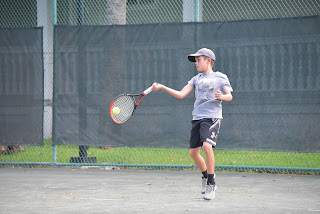 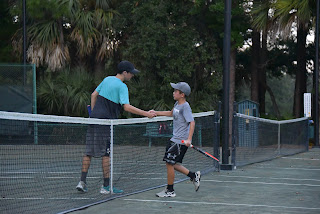 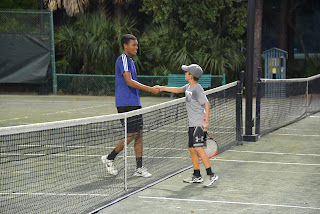 Some of Connor's matches were on courts that didn't allow positioning a camera to video the action, but I did take videos during two of them and put together a short video showcasing some of the good points. In retrospect, I should have gotten off my butt and recorded the final match, but I was worried I'd distract him and was frankly pretty tired as I'd been back and forth to the tennis courts from 8am to 8pm with the kids. That said, I'm sure Connor was even more exhausted after six matches and I should have just taken some videos.


Following Connor's victory, Coach Max presented Connor with his trophy and we snapped a picture of them together. Connor's been taking some lessons with him lately, but unfortunately for us Coach Max accepted a head coaching position at another tennis club so we won't be able to continue with him going forwards. We are all so proud of Connor and what he accomplished on Saturday. He has been improving steadily and it was neat to see it all come together. All we asked of him was to try hard and do his best, and it's a big bonus that his best was enough to get him a tournament win. 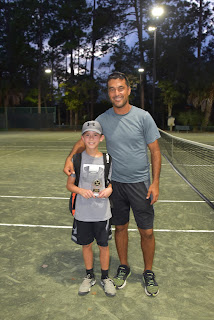