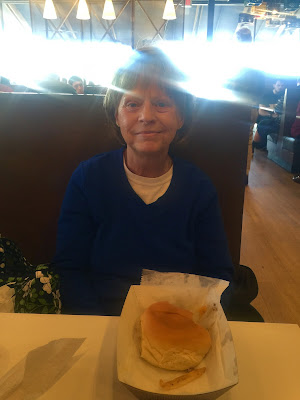 On Thursday, February 18th, Grandma Genie flew in from KC for a visit. Genie finished up her chemotherapy recently and her MRI on Monday showed that her tumor has shrunk substantially. She has a little while before her surgery, so it was a good time to come down and visit while she was feeling good. Andrea picked her up from the airport and they stopped by MShack to get Genie a burger.

Paige had put together a present and card for Grandma on Wednesday night. When Paige got home from school she gave it to Grandma so she could open it. It was filled with odds and ends that Paige had found around the house. All kinds of goodies like Shopkins and her artwork. 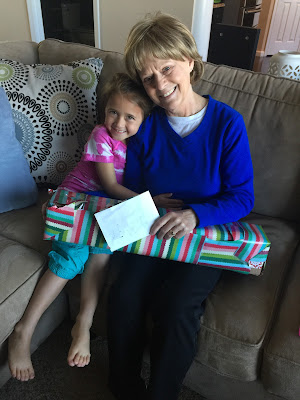 When Grandma got tired of wearing her wig, she took it off and Paige was very interested in it. Paige put it on and it was so hilarious I had to take a pic. 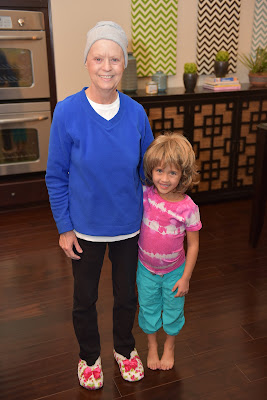 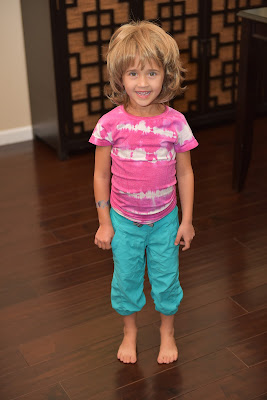 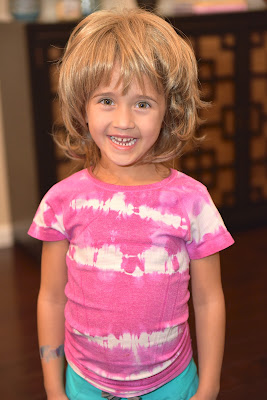 Connor decided he wanted to try it on too, he was whipping his head around and seemed to like the long hair in his face. 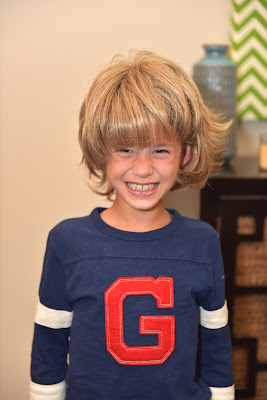 In the evening, we had game night, and played spoons. Paige was the scorekeeper and had a rollercoaster of emotions throughout the game. One second she'd be beaming because she got a spoon, but then she'd get very sad when she realized Daddy or Grandma Genie didn't. Grandma and I didn't fare so well in spoons. At the end of the game, when Paige had to mark Genie's final letter, she had big tears rolling down her face. 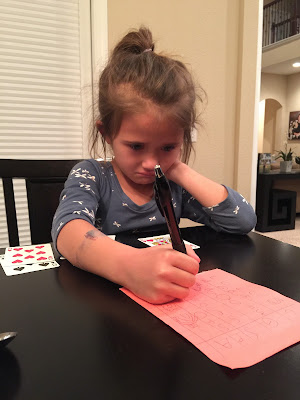 Paige read the scores bravely as the tears flowed. Connor was thrilled with the score sheet because he didn't have any letters at all. 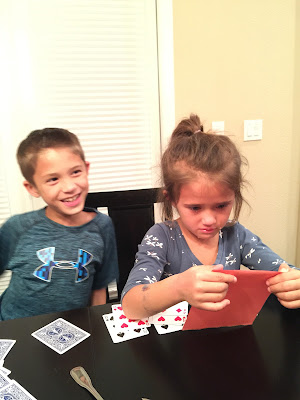 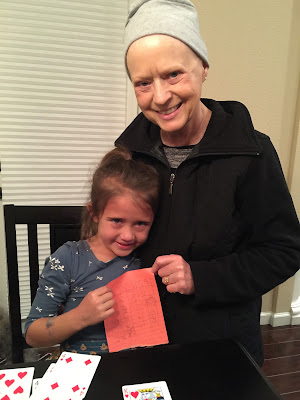 Paige gave everyone letters as she kept score and also gave everyone pictures if she felt they deserved them. Connor got a frowny face, but then she decided to give him four smiley faces and hearts. Grandma got a rainbow, hearts and unfortunately the most letters. Paige meant to spell SPOON, but it ended up as SPOOS. Daddy got a heart and smiley face and Mommy got a rainbow, butterfly and flower. 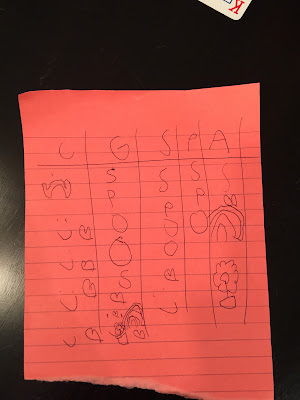 After our game of SPOOS, we played trouble, and Paige ended up winning. 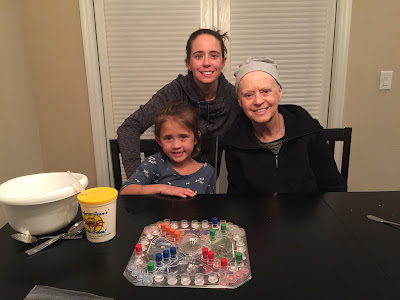 In the morning, Paige and Grandma worked on brownies. 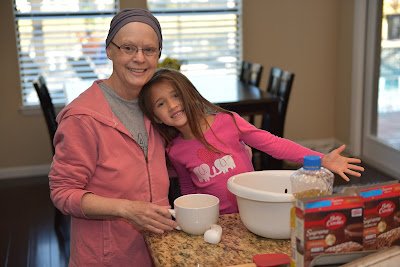 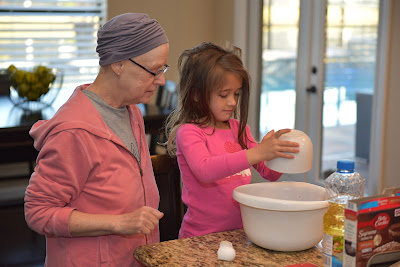 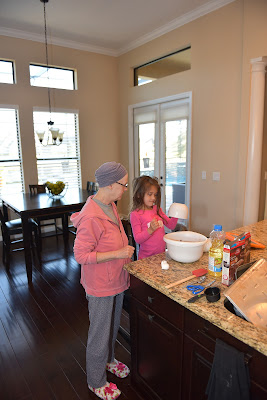 While the brownies baked, Paige read the book that she was sent home with for her weekly reading assignment. It was definitely one of the harder books she had to read, and Grandma had to help quite a bit. 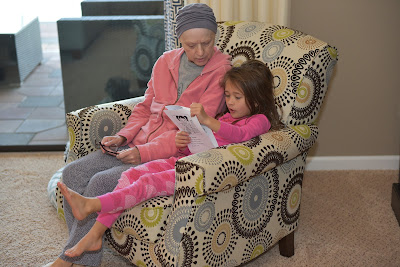 Paige and Andrea went to Lakshmi's birthday party and Connor helped Grandma with the frosting for the brownies. 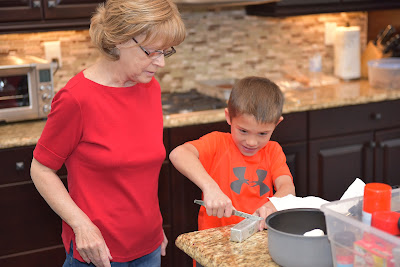 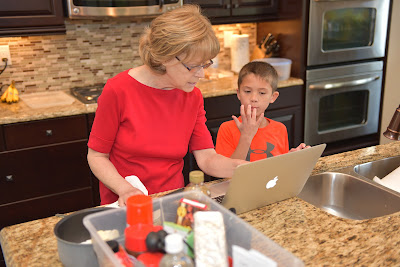 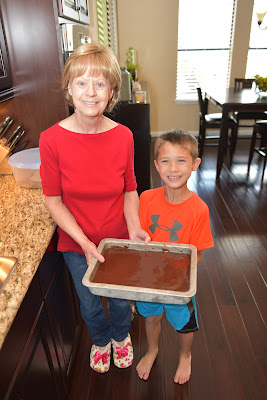 After Paige and Andrea got back from the birthday party, we went to Town Center for lunch at Cheesecake Factory. After lunch we went to Target and Grandma bought the kids their birthday presents in advance. Paige picked out a Barbie head and hands doll so she could practice her makeup, and also a Disney Descendants doll. Connor opted for an iTunes gift card so he could strengthen his Madden Mobile team. 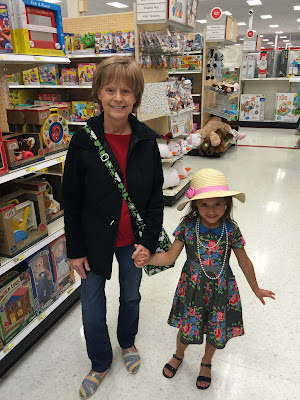 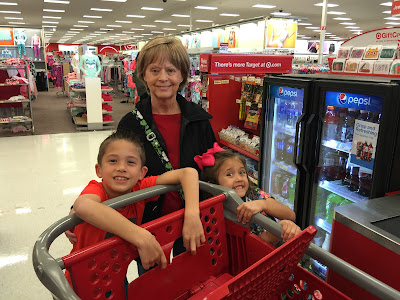 After lunch, a bunch of the kids in the neighborhood were outside playing, so we played outside with everyone for a while. 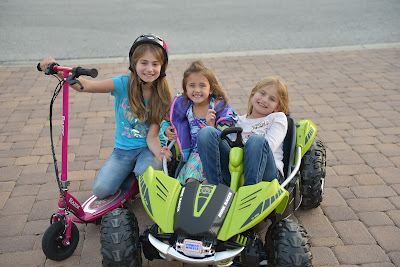 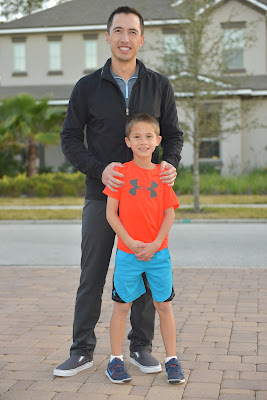 Paige changed in to some of her new clothes, and ended up picking a bunch of patterns that didn't exactly go together. It was a pretty wild sight. 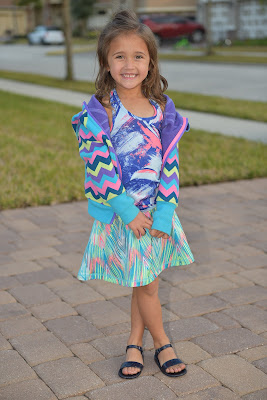 Andrea got a little cold so she brought out a blanket. 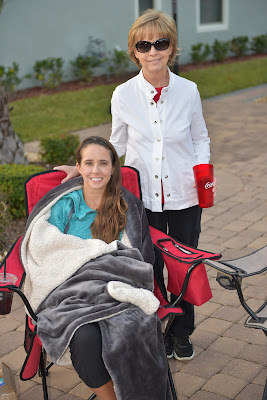 Paige and Grandma worked on Barbie for a bit after they came inside. Paige loved all the different pieces. Unfortunately I didn't get a picture after they put in the clip on hair extensions. Paige wanted to wear them herself and wear them to school like one of her classmates did. 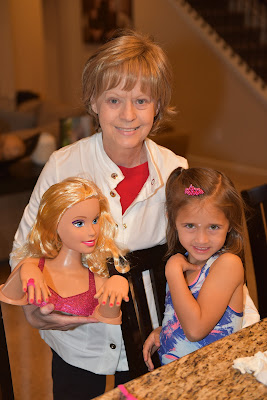