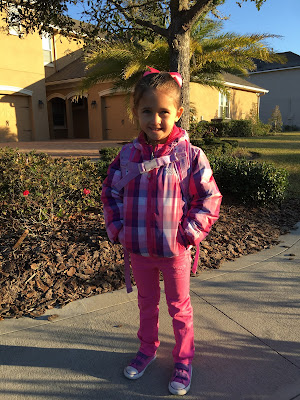 In most ways, Paige has adjusted well to Kindergarten and seems to enjoy school. She has some neighbor girls in her class and for the first half of the year things were smooth sailing. Paige has a big class with two teachers, and after Christmas, her assistant teacher Ms Pate was promoted to be a full time teacher (she took over in Connor's classroom when his teacher Ms Yeaple retired) and Paige got a new assistant teacher.

Unbeknownst to Andrea and me, she also had been getting some warnings regarding her behavior with a couple of the other girls in her class. Apparently, at recess, they weren't being very nice to some other girls and eventually the teachers decided it would be best to separate the three girls. Even at lunch time, the three girls were arranged to be at separate tables. Around that time, Paige got in to some trouble. During one lunch, she and one of the girls were spitting at each other. The lunch monitor was appalled and made them clean it up, and Paige's teacher sent a note home regarding Paige's behavior. Paige threw the note in the garbage on the bus and covered the "See Note" note in her behavior chart with a sticker so that we wouldn't notice. Later on in the same week, she got in trouble at lunch for being under the table and throwing a little boy's lunch box. Again, she threw away the note, but then Andrea noticed the "See Note" notes in the behavior chart. Eventually, after Andrea questioned her, the story came out and we realized she'd been having some trouble.

Andrea and I went to a conference with Paige's teachers and we discussed the issues that she's been having. We agreed that it would be best to separate Paige and the other girls. We were happy to hear that Paige has been doing very well academically, however we were disappointed that she hasn't been behaving like she should.

We came out of the conference feeling better about things, but that same day Andrea got a call from Paige's teacher. Apparently, at recess, Paige was playing around one of the girls that she should have been separate from, and the little girl fell off some playground equipment and got hurt. The little girl told everyone that Paige had pushed her off the playground equipment, and Paige could have gotten in to quite a bit of trouble. Paige denied having pushed her, and said that the other little girl had her hand on Paige's head and that Paige pushed her hand off her head and that was all. The teachers asked some other children that had been playing near them and the other children told the teachers that Paige had not pushed anyone. The little girl eventually changed her story and was forced to apologize to Paige and to the teachers in front of the class.

Thankfully, Paige didn't get in trouble for the incident, but it definitely has convinced us that we need to continue to work with her to make good choices at school and with her friends. She is such a sweet little girl and I hope things will improve from here. The entire week she did well on her behavior chart, so hopefully we're on the right track.
Posted by Shawn Vernon at 8:29 AM