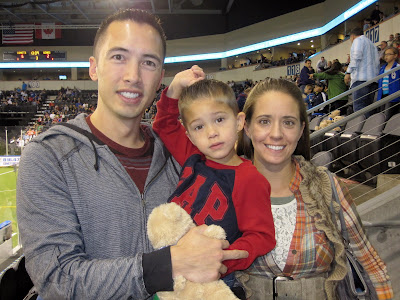 On Friday last week we went to the Comet's indoor soccer game. Connor's been playing soccer a bunch, but has never seen grown ups or really experienced people play. Andrea heard about it from the soccer league Connor did outdoor soccer with and got us some tickets.

It was a nice night to go and they were giving away "Build-a-Bears" with each ticket, so Connor got another stuffed animal. Just what he needs, more stuffed animals! He enjoyed the game for the most part. He paid fairly close attention to the action, but there was a lot to see and he enjoyed taking in the whole spectacle of the game. Lots of people, music, fans beating drums, crazy kids dancing and hoping to be on camera, mascots, prizes being thrown into the stands, etc.

The game was pretty exciting to watch. The field was small and there were walls all around the field to keep the ball in play. Not much time to rest and more scoring than a regular soccer game.

Connor had a good time and we're glad we went!
Posted by Shawn Vernon at 7:27 PM