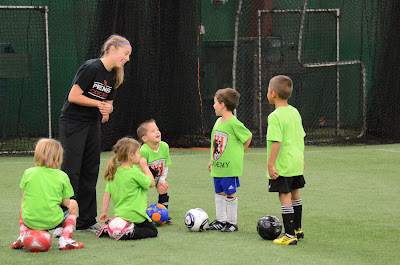 Connor's got a fun new indoor soccer league that he's been going to for the last couple weeks. It's getting cold outside and it's nice there's somewhere indoor that's close.

The setup is different than other soccer practices he's had. The first half, they focus on soccer skills, but do different exercises as games. They play a "Simon says" type of game where each kid takes turns calling out a soccer skill or body part, then everyone on the team has to do it. If someone says "head", then everyone puts their head on the ball. If someone says "scissors", then everyone has to do the scissors move over the ball. Another game that Connor likes is the "Sharks and Minnows" game. The kids that are minnows have to line up and try to kick the ball across the field. If they don't keep it close enough, then the sharks will kick their ball away. It's a good way to learn ball control and still have some fun.

All the kids are split up in to two teams. Connor's coach is Amelia. She's very fun, Connor warmed up to her quickly, and they get along great. On the first session she let their group chose the name of their team and they came up with "Tiger-dragons".

For the second part of the practice, they do a scrimmage between the two teams. The first game, Connor was a bit outclassed and didn't score at all. The kids seem to be a bit bigger and older than he played against in the outdoor league. Connor still tried hard, ran like crazy, and did a good job on defense, but he's definitely at a disadvantage. The second game, Connor worked hard again and did well on defense. He was getting a little discouraged though as the game went on. One of the bigger kids on the other team bumped in to him, knocked him down, then scored. The coaches don't really keep score, but Connor always has a mental tally in his head and knew they were losing 2-0 at that point. On the last play of the game, Connor got the ball and sprinted down to the goal. Many kids would have hesitated when they got near the goal, especially with a bigger boy guarding it. Connor's killer instinct took over and he didn't hesitate. He kicked the ball while in full stride and got the Tiger-dragon's only goal of the game!