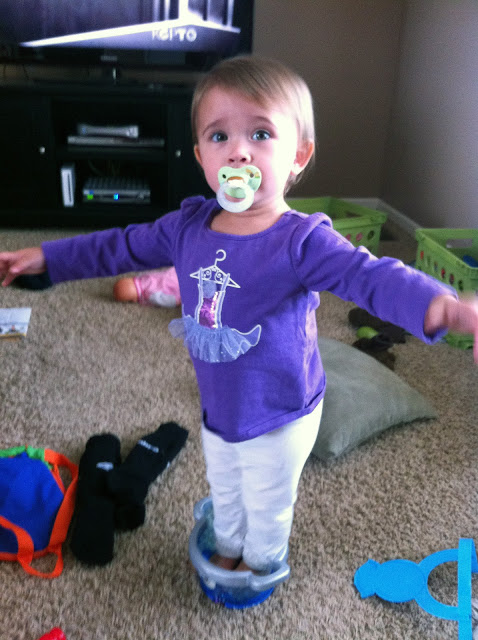 Paige is such a wild thing. She has such a unique personality and it's amazing how different your own children can be from each other. She is brave, outgoing, assertive, loves to tease, and she is super sassy.

There are a lot of examples of her personality, I'll try to relate a few I can think of now.

The other day I was going to fix the toy box in the living room and got out my big loud drill. Paige was pretty scared of it, and when I put it in to the toy box and started it up it was loud and scared her. For some reason she thought it was going to hurt her toys. Instead of running away from it, or clinging to Mommy who was nearby, she charged over and put her hands over her books and toys to protect them and swatted at the drill. I thought it was a pretty brave thing for a little girl to do.

She is very headstrong. She will get something in her head (or more often, in her hands) and it's almost impossible to dislodge it. She will want your phone or a toy and will go nuts if she doesn't get her way, throwing the most amazing fits I've ever seen. She will get herself worked up into a state where she can hardly breathe and will take 20-30 minutes to settle back down. Andrea laughed today and said that she used to throw the same kinds of fits.

Paige doesn't care to listen. Most of the time when you tell her something, you can tell she understands, but she just doesn't care. If she's banging on the table with a fork and you ask her to stop, she will pause for a second, smile at you, then bang away harder than ever. If she's poking at Chloe's eyes and you ask her to stop, she'll lunge and grab at Chloe even more. We are very consistent parents, and follow through when we say something, but she is determined to test our limits. Connor went through a very short phase of testing us, but eventually realized that we'd come over and follow through on our words. There seems to be no end in sight with Paige.

She is a funny thing. She has such a silly sense of humor. She has some of the loudest toots and will let them rip when she's bending over. They surprise everyone, including her, and she will crack up afterwards. She is usually in a great mood and will just laugh at everything and everyone. She loves silly songs and games and especially loves to tease. She will laugh and laugh while she's tormenting Connor or anyone else she can get a rise out of.

She is a climber. She loves to test her balance and climbing abilities. She will climb inside or on top of any boxes she finds and will try to step up on anything that will hold her weight. Yesterday morning she was standing up inside a toy pot that she could barely squeeze her feet in to.

We love our Paige! We're so blessed to have such an energetic little girl in our life.
Posted by Shawn Vernon at 3:09 PM

Lots of personality. You're going to have to keep both eyes on that one.