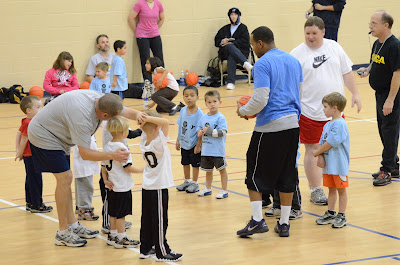 Connor had his first official basketball game with his Bitty Basketball league on Thursday. The coach said he was the point guard since Connor was the best dribbler and the Connor's blue team made a valiant effort although they were pretty well outmatched. The white team had some tall boys and they were quite a bit better at defense than the blue team. Connor's team typically had a good idea of what they wanted to do, however they didn't always execute on offense and on defense they weren't very aggressive and mostly just stood beneath the basket, waiting to catch the ball after it went through.

Overall, it was a lot of chaos, but Connor enjoyed it and he did pretty well. Before the game, we talked about how he needed to pass the ball sometimes after he dribbled it down and he did a good job being a cooperative teammate. He took a number of shots, but unfortunately only one of them went in. It was very hard to get a clean shot with the white team defending as well as they did.

Mommy kept Paige out of trouble during the game while Daddy recorded as much as possible. 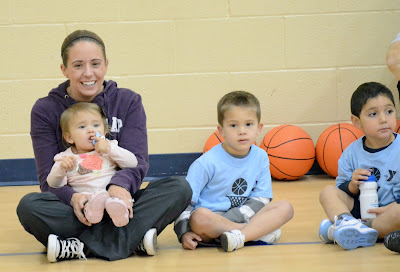 Daddy took a quick picture with baby sister. We tried to keep her strapped in so she wouldn't run out on the court. 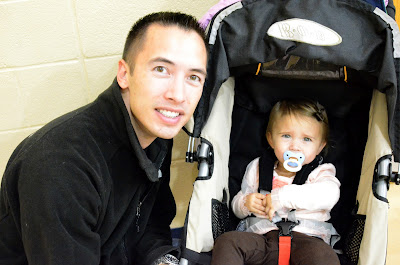